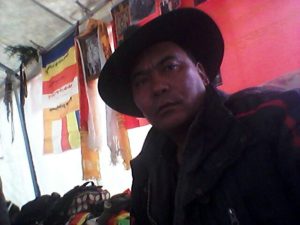 The Tibetan Centre for Human Rights and Democracy (TCHRD) is deeply concerned over the health condition of Tsegon Gyal, a prominent Tibetan political prisoner who was released last December after completing a three-year prison term at Dongchuan prison (西宁市东川监狱) in Xining, Qinghai Province, in the Tibetan province of Amdo.

Less than a month after his release on 6 December 2019, Mr Gyal was admitted to hospital where he underwent gallbladder surgery to clear up blockage of cystic duct on 14 January this year. His condition is said to be critical.

Mr Tsegon Gyal, 58, had been sentenced on the charge of ‘inciting separatism’ on 10 January 2018 by the Intermediate People’s Court in Tsojang (Ch: Haibei) Tibetan Autonomous Prefecture. The court had announced the verdict more than eight months after holding the trial on 3 May 2017.

Mr Gyal was punished for publishing a blogpost on WeChat that criticised the Chinese government for failing to genuinely promote its policy of ‘ethnic unity’. Successive policies and campaigns implemented by Chinese authorities have shown that the unity promoted among ‘ethnic groups’ is essentially aimed at diluting the distinct cultural and religious identity of Tibetans and other so-called ethnic minorities.

The UN Working Group on Arbitrary Detention at its 78th session in April 2017 ruled that the deprivation of liberty of Mr Gyal was arbitrary and that there was no legal basis to justify his detention. The Working Group also maintained that international norms relating to the right to a fair trial as established in the Universal Declaration of Human Rights and in the relevant international instruments were not observed and that Mr Gyal’s detention “constitutes a violation of international law on the grounds of discrimination based on birth, national, ethnic or social origin, language, religion, economic condition, political or other opinion … or any other status, that aims towards or can result in ignoring the equality of human beings.”

TCHRD believes that Mr Gyal’s imprisonment was a blatant violation of Chinese domestic law and international human rights treaties that provide for the right to freedom of speech, expression and opinion. Freedom of expression is a foundational right that provides an enabling environment for the exercise of many other fundamental rights and freedoms. Moreover, the right to freedom of opinion is an absolute right that cannot be restricted under any circumstances or excuses such as alleged incitement of separatism or endangerment of state security.