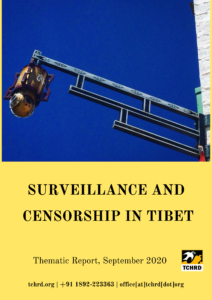 China’s widespread and intrusive practices of mass surveillance and censorship have served as a perfect foil to continue perpetrating human rights violations with impunity in Tibet. Since 2008 when Tibetans held widespread protests calling for freedom and return of His Holiness the Dalai Lama, Chinese authorities have tightened control to ensure that such an event will never happen again. For years now, the Chinese Communist Party (‘Party’) authorities have enforced a model of social control that has proved highly successful in silencing Tibet and encouraging the rapid forced assimilation of Tibetans.

A new report released today by the Tibetan Centre for Human Rights and Democracy (TCHRD) documents how Tibetans in and out of Tibet are not only censoring themselves, they are censoring each other because Chinese authorities have made censorship the responsibility of the whole populace. Various methods of mass surveillance such as the “Grid Management” and “Double-Linked Household” systems obligate individuals to report suspicious activity and betray one another or face consequences.

The report titled ‘Surveillance and Censorship in Tibet’ further reveals that mutual self-censorship threatens Tibetans’ ability to express their political and cultural identity or protest human rights violations and political repression. As the report notes, surveillance and censorship system in Tibet is designed to discipline and produce subjects that are willing to exercise self-censorship in order to avoid coercive and punitive state retaliation. It is the fear of disciplinary actions such as torture and imprisonment of oneself and one’s loved ones that force many to self-censor and unwittingly protect the interests of the Chinese Party-state. It aligns on many levels with the Party’s political and ideological campaigns to make citizens ‘patriotic’ and ‘loyal’.

In addition to the “Grid Management” system under which counties are subdivided into cells for intrusive monitoring and surveillance, a network of thousands of “convenience police posts” collects biometric data on the population and serves as outposts or checkpoints in the event of potential unrest. These police posts range across the entire region, with plans for building at least one such post in each of the 5464 villages in Tibet Autonomous Region (TAR), serving to extend the physical presence of the Party-state into every nook and corner of Tibet.

The mass collection of DNA profiles alongside online surveillance and censorship has enabled China to establish a high-tech surveillance state. In June 2019, Chinese authorities had collected * DNA samples of all residents in Chamdo (Ch: Qamdo) City after the police established the DNA database system to fight crime although evidence show little in terms of fighting actual crimes. Chamdo is the third largest city in TAR with an estimated population of 657505. The database covers all levels of governmental jurisdictions, monastic institutions, and the farming and nomadic community and contains basic information on all citizens including fingerprints, blood samples, and irises.

In one of the testimonies in the report, a Tibetan man recounted the intense restrictions he faced during his 2016 visit to his hometown in Dola (Ch: Qilian) County in Tsojang (Ch: Haibei) Tibetan Autonomous Prefecture, Qinghai Province in the Tibetan province of Amdo. On his arrival in Xining, he had to report to the provincial United Front Work Department, where he was temporarily given an iPhone 4 that he was required to use for all communication purposes during his entire stay in Tibet. He was prohibited from using his own phone, which was subjected to a thorough search by the authorities. There was also an explicit order that forbid him from taking any pictures and videos of his hometown or share any such information with Tibetans in India. The iPhone 4 had preinstalled malware that automatically downloaded pictures and audio messages enabling the authorities to track his movement and location, as he later learned from his relatives.

The report warns that ignoring the unprecedented level of imposed self-censorship and attendant human rights violations will have serious and widespread negative ramifications not only on human rights situation in Tibet and elsewhere in the PRC but also outside of it due to the normalisation of ‘digital transnational repression’. Concluding with a list of recommendations, the report calls for a strong global coalition of states, civil societies, corporate bodies, and individuals united by their shared concerns and values about human rights and individual freedoms to counter the growing influence of Chinese state surveillance and censorship model.

*The link is no longer accessible. Below is a picture of the news report in Tibetan: 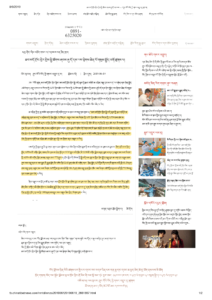