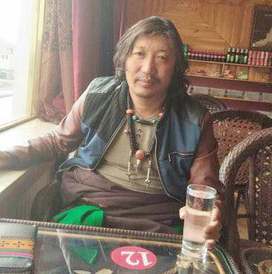 The Tibetan Centre for Human Rights and Democracy (TCHRD) expresses grave concerns over the uncertainty surrounding the appeal case of imprisoned Tibetan community activist A-nya Sengdra and his associates, and calls on the Chinese authorities to release them immediately without conditions.

TCHRD has been informed that the hearing for the appeal case, scheduled at 9.30 am on 27 April at the Golok Intermediate People’s Court, had been postponed indefinitely because one of the judges had suddenly taken ill. The notice for the court hearing had been issued on 21 April that required Sengdra’s lawyer Lin Qilei to appear in the first courtroom of the prefectural level court.

The indefinite postponement of the hearing has caused much concern among Sengdra’s friends and supporters. The delay in appeal hearing signals a possible attempt by the authorities to drag their feet on the case leaving no possibility to obtain justice for Sengdra and his associates, who continue to spend time in prison for crimes they did not commit.

TCHRD calls for the immediate and unconditional release of A-nya Sengdra and his associates: Soedung, Chinthrun, A-shol, Do Sang, Wangyal, Gyaltsen, Ngogbey, Orgyen Tsering, and Wangchen from illegal imprisonment. They are the victims of the corrupt government practices and a fettered judiciary that uses law as a weapon to crush peaceful dissent and criticisms against the Party-state.

The imprisonment of Sengdra and his associates was the culmination of devious machinations on the part of local Chinese authorities to silence Sengdra and destroy his successful grassroots movement against government corruption and oppression. The charges of ‘provoking trouble’ and ‘public order disturbance’ are conveniently vague and have been used frequently in recent times to persecute activists and human rights defenders.

Additionally, local Chinese authorities used the ongoing nationwide campaign to crush so-called “black and evil forces” as a pretext not only to delay and withhold information from the defence lawyer thus denying fair trial rights, but also to punish Sengdra and his associates with prison terms. A-nya Sengdra and his associates have entered the long list of victims of ‘Socialist Rule of law with Chinese Characteristics’ that has no place for judicial and lawyer independence because the security and stability of the Party-state remains paramount.