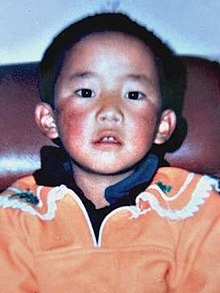 On the 25th anniversary of the enforced disappearance of the 11th Panchen Lama Gedhun Choekyi Nyima, the Tibetan Centre for Human Rights and Democracy (TCHRD) reiterates its call for his immediate and unconditional release and unfettered access to independent international human rights group to ascertain his fate and wellbeing.

Gedhun Choekyi Nyima was six years old when he and his parents became victims of enforced disappearance at the hands of Chinese authorities on 17 May 1995, three days after His Holiness the Dalai Lama had recognised him as the reincarnation of the previous 10th Panchen Lama.

In blatant disregard and violation of the right to freedom of religion and belief of the Tibetan people, Chinese authorities appointed another boy named Gyaltsen Norbu as its choice of Panchen Lama in November 1995.

Chinese authorities must cease misleading the international community with unverifiable claims that Gedhun Choekyi Nyima was supposedly leading a “healthy and happy life” and “did not want to be disturbed”. These claims have been made for decades without any evidence.

In 1996 when the Panchen Lama was seven years old, Ms. Santos Pais from Portugal, an expert from the UN Committee on the Rights of the Child asked China during an interaction: “How could it be verified that the child recognised by the Tibetans as the reincarnation of the Panchen Lama was being held in isolation in his own interest and in accordance with the parents’ wishes, as the Chinese authorities stated? Moreover, how was it possible to speak of the best interests of the child when the child’s opinion had not even been sought? Would it be possible to authorise a visit by United Nations representatives to verify that the child was in good health?”

Chinese authorities have, all the while, ramped up its propaganda machinery and raised the public profile of Gyaltsen Norbu to obliterate the issue of the missing Panchen Lama.

Chinese authorities must understand that no amount of deceptive narratives or justifications can diminish the enormity of the crime it continues to commit by withholding any access to Gedhun Choekyi Nyima. The crime of enforced disappearance is a continuous crime until the fate or whereabouts of the disappeared person becomes known.

By torturing and imprisoning ordinary Tibetans who call for the release of the Panchen Lama, Chinese authorities are committing a series of human rights violations and crimes against humanity. Last year, a 20-yr-old Tibetan man named Wangchen was sentenced to four years and six months in prison for peacefully calling for the release of Panchen Lama. His aunt Dolkar was sentenced to one year and three months because she shared the news about Wangchen’s detention with others.

TCHRD urges the Chinese authorities to respect the concerns expressed by the international community and allow an independent fact-finding delegation to visit Gedhun Choekyi Nyima and his family. Gedhun Choekyi Nyima is now a 31-yr-old adult and no longer requires the “protective custody” of Chinese authorities. His and his family’s basic human rights to live freely and without fear must be respected and fulfilled.