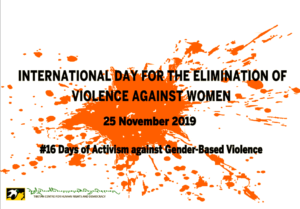 The Tibetan Centre for Human Rights and Democracy (TCHRD) will join the UN’s annual campaign of 16 Days of Activism against Gender-Based Violence. This global campaign to end all forms of violence against girls and women begins on the International Day for the Elimination of Violence Against Women, 25 November and ends on Human Rights Day, 10 December.

Gender-based violence (GBV) affects girls and women irrespective of race, class, religion, ethnicity, or economic background. Recent figures from the World Health Organization show that 15 million girls between ages 15 and 19 worldwide have experienced forced sex at some point in their life. Globally, as many as 38% of murders of women are committed by an intimate partner. Violence against women is a significant public health issue and a violation of women’s human rights.

Throughout the 16-day campaign, TCHRD will share 16 stories of gender-based violence faced by Tibetan girls and women. Shot in the exiled Tibetan community in India, these films highlight gender inequality as a contributing factor to violence against women and encourage more women to break the silence surrounding GBV crimes. All those who choose to speak openly or anonymously about their experiences of GBV merit respect and admiration. The women of these films appeal to other survivors to speak out and demand justice. Their stories underscore how many GBV cases go unreported, allowing the perpetrators of these crimes to remain unpunished.

To build a community free of GBV crimes, we need to inform and educate all individuals about gender-based violence. Most importantly, we need to teach GBV prevention, promote gender equality, and make services available to GBV survivors. Our first steps are to end the stigmatization of GBV survivors and to ensure these survivors do not fall prey to ‘victim-blaming’. Effective mechanisms must be established to ensure that survivors can access justice through formal and informal means. As gender activist Ms Tenzin Pelyoun told TCHRD, “Punishing the accused does not solve the problem. It is also important that we provide all possible support to the survivors, such as psychological support and legal support as well as rehabilitating them if the need arises.”