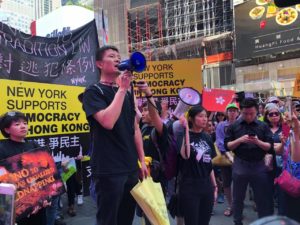 “We protest for change. We protest to expose the brutality of the government. We protest to let the world know there are still many like us who are willing to sacrifice for universal value. We protest because we have hope for a better society. We protest most importantly because through protest we define our own dignity and identity.”

Our dissenting hero of this week Zhou Fengsou is a Chinese human rights activist. He was one of the student leaders of the 1989 Tiananmen Square protest for which he was imprisoned for a year without any trial and sentence. Zhou Fengsou is now exiled in the United States and currently serves as the president of Humanitarian China based in California, US.

Zhou Fengsou was a college student when he first joined the protest calling for freedom and democracy in China.

“I joined millions of Chinese together to call for a better China with freedom and democracy for all. It was very exciting.  It was like a festival of freedom. When together we shout it was like freedom was within reach. Even though the protest was brutally repressed. Still today I am excited and motivated by the dream we shared with so many people. It was only because of the protest that we knew that there were so many like us who shared the same dream and the brutal killings cannot change that and the censorship cannot change that.”