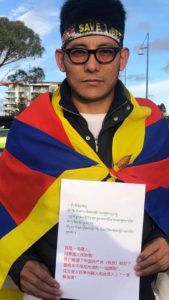 Our dissenting hero of this week, Tenpa Dhargyal, is a former political prisoner and a long time human rights activist. Tenpa spent more than five years in Chinese prison before he escaped into exile in India.

His time in prison made him even more resilient and determined to work for the Tibetan cause. Tenpa is now settled in Brisbane, Australia and is currently carrying out a campaign protesting against the Chinese government in the wake of the coronavirus pandemic.

“Many countries and governments across the world have changed their perspective on China.  In this situation, we Tibetans must take this opportunity to proclaim the fact that Tibet is not a part of China and that historically Tibet is an independent nation. That is why it is important to make this clear to the international community.”