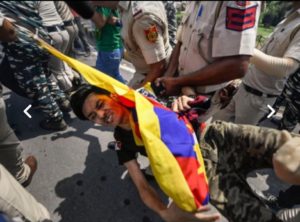 Our #dissentinghero of the week, Dorjee Tashi, popularly known as Dorjee Rangzen is a human rights activist. He has participated in a number of peaceful protests. In 2013, he was imprisoned for peacefully exercising his right to publicly express his opinion.

“I was sent to Tihar jail in Delhi for staging a protest against the Chinese leader’s visit to India. When I got released from prison, I received the news that my father had passed away in Tibet. I will never forget that moment because I never had the opportunity to meet my parents.”

Dorjee Tashi is a member of the Regional Tibetan Youth Congress in Delhi and is involved in many community service activities for many years.

“We protest because there is no respect for international standards for human rights [in Tibet] and no truth and justice for Tibetans under the oppression of the Communist Party of China.  My brother had taken part in the 2008 uprising in Tibet. Like him, there are many Tibetan martyrs who self-immolated and had been subjected to severe torture by Chinese authorities. We protest to let the international community know that there is no justice for our people and that Tibet become independent and our people enjoy human rights.”