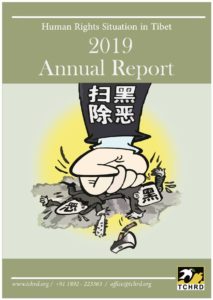 The Tibetan Centre for Human Rights and Democracy is pleased to announce the release of 2019 Annual Report: Human Rights Situation in Tibet earlier today in Dharamsala, India.

The report documents China’s ruthless suppression of any political dissent while steadily using policies and legislation to chip away at the pillars of Tibetan political and cultural identity. The PRC demonstrated no intention of following through on its international obligations and its actions in Tibet run directly counter to the international agreements it has signed and ratified.

Since 2018, Chinese authorities in Tibet Autonomous Region and other Tibetan areas have used the veil of a nationwide anti-crime campaign to hide the widespread and systematic persecution and oppression of Tibetan activists and human rights defenders. The campaign has exacerbated the chilling effect caused by the persistent criminalisation of activities undertaken in defense of human rights.

Chinese authorities must repeal all laws and regulations that restrict and violate basic human rights and fundamental freedoms. All repressive policies and practices that allow extrajudicial detention, political indoctrination campaigns, encroachment on the Tibetan autonomy and agency, and targeted surveillance must be discontinued immediately.

The full text of the report is available here.