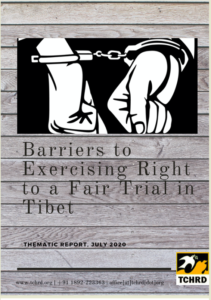 The government of the People’s Republic of China (PRC) claimed in a September 2019 white paper that it had “continuously strengthened the rule of law for human rights” by “uphold[ing] law-based governance, law-based exercise of power, and law-based government administration” and “ensuring independent and impartial exercise of judicial and procuratorial powers, guarantee the right to fair trial for all parties and the legitimate rights and interests of criminal suspects, defendants, prisoners”.

Sengdra is among the thousands of Tibetans who have been denied the right to a fair trial in the PRC’s criminal justice system, in compliance of international standards. Since 2017, Chinese authorities have detained thousands of Tibetan monks and nuns in extrajudicial detention centres for political re-education for months without charge or trial.

More than 12 years after widespread protests swept Tibet in 2008, there is no official confirmation on the exact number of arrests, custodial deaths or imprisonment prompting international human rights organization and UN human rights experts to demand more information from the PRC. In May 2019, Human Rights Watch released an updated list of 80 Tibetans whose whereabouts, wellbeing, or charges remain unknown more than a decade after their arrests.

The PRC’s failure to guarantee the right to fair trial in its criminal justice system is one of the major reasons responsible for gross human rights violations in Tibet where the Party-state’s discriminatory policies are targeted at crushing dissent and peaceful advocacy for human rights. In a report released today, the Tibetan Centre for Human Rights and Democracy (TCHRD) highlighted the areas of concern regarding the exercise of the right to a fair trial in the Chinese criminal justice system and its human rights implications in Tibet.

The report contains chapters on detention and arrest, other restrictions of liberty, the use of extorted confessions, the right to legal representation, and the absence of judicial independence, followed by a set of recommendations to reform the criminal justice system with the goal of promoting human rights. The chapter on the barriers faced by Chinese human rights lawyers features exclusive interviews with Lin Qilei (defended A-nya Sengdra), Teng Biao, Liu Shihui, Wang Yu (widely known as China’s “bravest female lawyer”).

International and regional human rights instruments guarantee the right to a fair trial on criminal, civil, disciplinary, and administrative matters before an independent and impartial court or tribunal. The PRC’s Constitution not only provides for the rule of law, but also that the Chinese Communist Party takes precedence and is above all else. In addition, the overarching requirement of the state security and social stability leads to the Party-state’s excessive intervention in the role of judges, impeding the ability of defence lawyers to act without fear of reprisal to uphold the human rights of their clients.