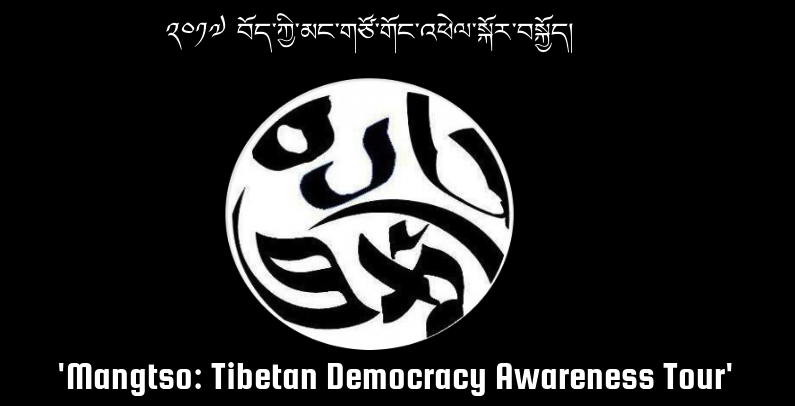 Through a series of activities focused on awareness raising and free and open public discussion, the campaign targets the exile Tibetan community including individuals, grassroots and civil society groups, as well as Tibetan parliamentarians, in an effort to accelerate the process of electoral reforms as a step towards wider democratic reforms in future.

“In any democratic society, grassroots and civil society groups can serve as an effective conduit between the general public and the policy makers and in terms of this campaign, we will relay the ideas of the Tibetan public to their parliamentary representatives on the issue of electoral and democratic reforms,” said Ms Tsering Tsomo, executive director of TCHRD. “By virtue of their independent status and grassroots presence, NGOs and other civil society organisations can mobilise public opinion and act as pressure groups for the adoption of electoral reforms.”

Ms Dolma Yangchen, president of TWA said conducting free and fair elections also require clear and transparent rules and regulations, in addition to an independent Election Commission, a neutral administration, and informed voters. “What we have learnt in our years of experience holding democracy awareness campaigns in exile Tibetan communities is that voter education and dissemination of credible information related to candidates’ backgrounds helps voters to make informed choices.”

In July this year, TCHRD and TWA organised a two-week campaign called ‘Mangtso: Tibetan Democracy Awareness Tour’ to encourage and promote free and open public discussion on some of the major issues related to the reform and strengthening of Tibetan democracy. Three TCHRD staff, Ms Tenzin Dawa, Mr Tenzin Nyima and Mr Trisong Dorjee, assisted by cameraman Mr Phuljung and TWA members, facilitated the discussions in various Tibetan communities located in Dehra Dun, Delhi, Bangalore, Bylakuppe, Mundgod, and Orissa. A survey was also conducted on these issues among the discussants who belonged to various age groups, gender and occupation. Among the responses received, a little over 74% agreed that the current practice of holding two rounds of election for Sikyong and the parliament should be continued, although more than 74% said the time taken to declare the primary results should be shortened. About 54% of the respondents did not find the common date for Sikyong and parliamentary elections problematic. The two-vote privilege enjoyed by the monastic population is seen as undemocratic by 70%. But at the same time, more than 57% do not see any problem with monks and nuns taking part in politics.

TCHRD will publish the full results of the survey in a special report on Tibetan democracy tentatively by the end of 2017. Meanwhile, opinions and suggestions collected from the public discussion will be submitted to the Tibetan Parliament in exile ahead of the September 2017 parliamentary session. The March 2017 parliamentary session could not reach an agreement on the electoral reform proposal. It is hoped that an agreement will be reached during the upcoming session. Videos of public discussion held during the awareness tour will be made available online beginning 2 September, which is the 57th anniversary of Tibetan Democracy Day.

TCHRD works to protect the human rights of the Tibetan people in Tibet and promote democratic principles in the exile Tibetan community. In addition to undertaking regular, systematic investigation of human rights situation in Tibet, the centre holds awareness and advocacy campaigns aimed at building a strong and resilient democracy that promotes respect for human rights and rule of law, free and fair elections, democratic governance and public participation.

TWA aims to promote the social, political, economic, and educational empowerment of Tibetan women-in-exile, ensuring their accessibility to adequate education and resources. Since 2005, TWA has conducted a number of awareness workshops on voter education and the importance of free and fair elections in democracy in various Tibetan settlements benefitting many especially at the grassroots level. TWA has 58 branches worldwide including branches in: India, Nepal, Europe, Japan, Australia, Switzerland, the US and Canada.