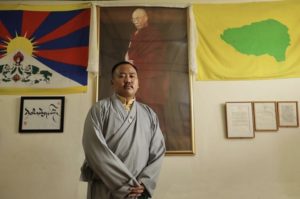 “Every act of defiance, resistance and protests serves as an important tactical measure for TYC’s strategic goal of freeing Tibet from the clutches of China.”

Our dissenting hero of the week, Gonpo Dhondup, president of Tibetan Youth Congress (TYC), the largest non-governmental Tibetan organisation based in Dharamshala, India, articulates the collective aspirations that give rise to public manifestations of resistance and protest activities initiated under his organisation.

“The core mission of TYC is to restore Tibet’s independence. This stem from the fact that Chinese occupation of Tibet is illegal and China has assumed complete control over Tibet for the last seven decades. Tibet has been ruled since under the tyrannical regime; the miscarriage of justice needs to end.

“The right to protest is a basic human right, which is completely neglected in Tibet under the control of the Chinese Communist government.”

As a third generation Tibetan born in exile, Gonpo has participated in various protest activities and was detained several times.

He believes that “effective protest campaigns on human rights, political, social and environmental issue affecting Tibet, not only put China on the spotlight but also adds global pressure on China to be accountable for their actions.”