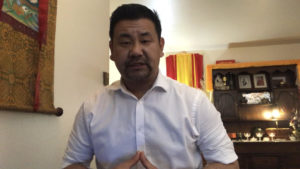 “It is high time that we create a strong global coalition amongst Tibetans, East Turkistan, Mongolians, Taiwanese, and Hong Kongers to make a collective effort and work for a greater cause and then make China responsible for all the inhuman subjugation of our people.”

Our dissenting hero of this week, Tsering Choedup, who had worked for nearly a decade at International Tibet Network before becoming the general secretary of Tibetan Association of Northern California. In between, he also worked as a former Tibetan wellness advocate at Community Health for Asian Americans (CHAA).

“As we all know China is trying to change the global narrative of this current pandemic situation and shift the global spotlight away from the COVID-19 that has affected the economy and health of the entire world. What China does these days with the border incursion in India and in the neighbouring countries including in South China Sea is nothing but a shrewd tactic to divert our attention away from the global pandemic.