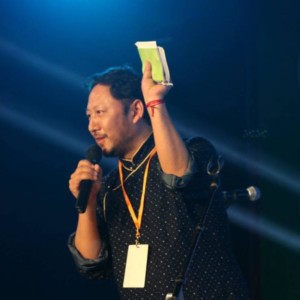 Our #dissentinghero of the week, Sonam Wangdue, is a long time member of the Tibetan Youth Congress. He has worked as a human rights activist and participated in a number of protests for many decades. He is also a well-known actor and a stand-up comedian in the Tibetan community.

“I believe non-violent protest action is an important tactic to use in our movement. If you do not agree with something, you have to speak out and if someone stops you then that’s wrong. Because to protest is our right.

“When we protest, we realise we do not have a country. That we are in a foreign land. And that our Tibetan brothers and sisters are in Tibet. These common emotions that come to fore during protest actions is a great way to bring unity among Tibetans inside and outside Tibet. That we are one in our experience of pain and loss and the realisation that the source of this suffering is the Chinese government. Therefore, the act of protest is very important. I urge everyone to continue to protest.”