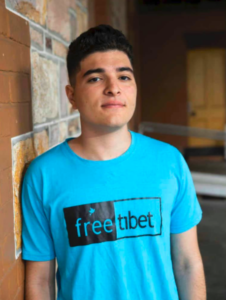 Our dissenting hero for this week, Drew Pavlou, believes that the protection and promotion of human rights should be a concern of all and that we must always raise our voices against injustices wherever they occur.

“[M]any people have asked me what business is it of yours as an Australian how the Chinese Communist Party treats the Tibetans, Uyghurs and Hong Kongers. Then I remind people of the universal nature of human rights. These rights don’t end at the border.”

Drew Pavlou, 21, is an Australian human rights and democracy activist. He is a philosophy student and senate member at The University of Queensland. In May this year, he was suspended from his university for alleged misconduct that was connected to his on-campus activism against human rights abuses perpetrated by the Chinese Party-state.

At one of the first protests he organised in June last year to protest Chinese actions in Hong Kong and persecution of Uyghurs, some 200 pro-CCP agents violently attacked Drew and fellow group of 20 student protesters sparking off international outcry and allegations that the University of Queensland was suppressing dissent and activism in deference to Beijing.