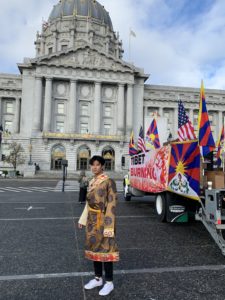 “The first time I actually noticed being kind of restrained for being a Tibetan in Nepal was when I wore that Free Tibet t-shirt or a jacket that had a Tibetan national flag in the front and said Free Tibet at the back and my dad was like you can’t be wearing that in the streets. The cops are going to get you and all. I didn’t really care, I just wore it because I wanted to wear it but that was the first time I actually noticed what being a Tibetan meant in Nepal and that’s still the issue.”

Our dissenting hero of the week, Tenzin Choeyang, was raised in Nepal and now lives in the San Francisco Bay Area. Choeyang became an activist at a very young age and is currently the board member of Students for Free Tibet West Coast. He actively participates in protest events and helps other local communities in raising awareness.

“The expression of free will is very important and the fact that it is available here is I think a step that young people should take.

“Exercising your free will is definitely something a lot of people take for granted and it should be used more thoroughly and that’s my opinion so young people out there If you have the ability to express the free will right then definitely do it.”