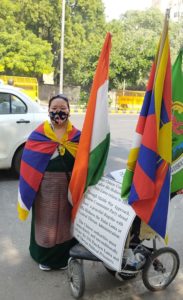 “I protest because it’s not only my right, it’s my duty to speak out in every way that I can when Tibetans inside Tibet do not enjoy even basic human rights.”

Our dissenting hero of this week, Mrs Tashi Lhamo, is a veteran protester and is currently the vice president of National Tibetan Freedom Movement, Delhi. She is also working as an outstation executive member of the Tibetan Women’s Association Centrex.

“Tibetans inside Tibet do not enjoy even basic rights under the oppressive rule of the Chinese government. They are not even allowed to keep portraits of His Holiness the Dalai Lama at their homes. I believe that Tibetans in exile are the representatives of those inside Tibet and have a moral responsibility to protest against the Chinese government.”