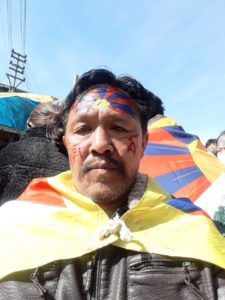 “No matter how happy we are here, we don’t have a place to call our own. We live on foreign land. It is one of the main reasons why we protest.  If we protest together, our wish will be fulfilled and that’s why we need to protest.

“I even tell my children that I will keep on protesting until Tibet is free!”

Our dissenting hero of this week Tashi Dorjee is an ardent human rights activist and a former member of the Local Tibetan Assembly of Dharamshala. He has also served as the gyakpon (local leader) of Dharamshala for the last 18 years. As an activist, Mr Dorjee has taken part in numerous peace marches for Tibet all across India and was detained several times.

Join the #WhyProtest Campaign by sharing our digital campaign messages on your timeline or your stories of defending the right to protest and why the freedom to dissent matters to you. If interested, write to Ms Tenzin Dawa for further information: tenzin.dawa@tchrd.org