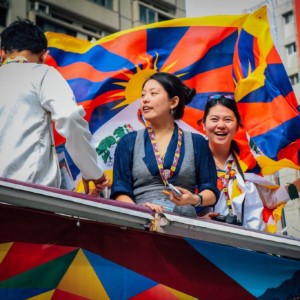 “In Tibet or in East Turkistan, we can see that a peaceful protest often leads to the disappearance of the protesters, they would get threatened, harassed, beaten, put into jail or just get killed, while none of the calls of the protest will be heard. And that’s why there were so many fellow Tibetans who chose to burn themselves, and that’s why many Uyghur brothers and sisters chose violence. Because nothing else works!”

Our #dissentinghero of the week, Penghsuan Lee, is the East Asia Coordinator for International Tibet Network. As a human rights activist, she has participated in a number of protests and advocacy movements.

In defence of the right to protest, Penghsuan cautions against falling into the ‘trap of injustice” if we rely on a single, narrow standard to assess a movement.

“In many places, we are privileged enough to exercise our freedom of expression and right to protest freely and peacefully, we’re protected by police and not being mistreated by them. And of course we should try our best, to keep our voices being heard while causing the least damage. But we should never take the tactics of a protest as the only standard of evaluating our movements.

“But still, it is dangerous to easily put the same standard on everyone, every movement in this world. Because in a place that is unjust to certain groups of people, or is basically a non-democratic and unfree society, the tactics people can use might be very, very limited.”