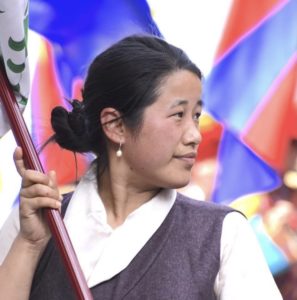 “The basis of the Chinese communist party or the Chinese government’s occupation of Tibet has been illegal and unlawful. Tibetans have since 1959 been peacefully protesting against the Chinese Communist Party for the illegal occupation and apart from that the kind of violent suppressions that we are seeing them conducting against peaceful protesters inside Tibet and because of the Chinese occupation we are seeing millions of Tibetans die, we have seen thousands of Tibetan political prisoners being arrested. Any form of protests against the Chinese Communist Party within the occupied territory had been completely intolerable.”

Our dissenting hero of this week, Lhagyari Namgyal Dolkar, a Tibetan freedom activist, is the daughter of a former Tibetan political prisoner. She was the former president of Gu Chu Sum Movement of Tibet and is presently serving as a member of the Tibetan parliament-in-exile.

“The human rights abuses that we Tibetans face are experienced equally and strongly by our allies like the Uighurs of East Turkestan, Southern Mongolians, Hong Kongers, the Chinese themselves and also the Taiwanese.

“So please come and join us as we peacefully protest and as we engage in an active non-violent protest against the Chinese Communist Party and make China accountable for all the atrocities and wrongdoing that has been committed not just to us but everyone around the world due to China covid.”

Lhagyari Namgyal Dolkar joins the #WhyProtest campaign to call on China to immediately: