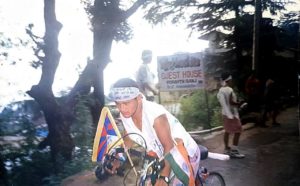 Kunga Dorjee, a human rights activist, is our dissenting hero of the week. He was a former member of the Regional Tibetan Youth Congress and the Tibetan local assembly in Dekyiling Tibetan settlement in Dehradun, India. As an activist, Dorjee has been at the forefront of numerous protests across India.

Kunga Dorjee recalls moments when people asked him if protesting really made a difference when one is confronting a big power like China “ I always tell them it is making a big difference. It is through protests, we create political awareness not just for the general public but also to the international community. The most significant thing is that participating in these protests will keep our activism alive.

“By participating in protests, we will be able to pass the torch of activism to our children so that they understand why we go to protests.”