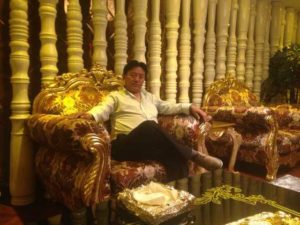 The Tibetan Centre for Human Rights and Democracy (TCHRD) is deeply concerned over the enforced disappearance of Tibetan businessman Tenzin Choephel, who was known for environmental and cultural advocacy work in Tachen Township, Nagchu (Ch: Naqu) County, Nagchu Prefecture, Tibet Autonomous Region, in the Tibetan province of Kham.

Choephel has not been heard or seen since his detention by Chinese police in March 2018 from Gongkar Airport in Lhasa. He had just returned from a trip to Chengdu city. After taking him to a detention centre in Lhasa city, police searched his house and allegedly found some photos of His Holiness the Dalai Lama and “several political literature”.

According to latest information received by TCHRD, Chinese authorities have warned local Tibetans in Tachen Township against discussing Choephel’s disappearance or face severe consequences. Any attempts to send or share Choephel’s photos have also been criminalised.

Choephel was known for his notable work in defending Tibetan environment and culture; promoting unity among Tibetans; and helping the poor and the destitute with his own money. He had extended steadfast support to several years of local opposition against Chinese mining activities along the sacred mountain ranges in Shak Rongpo region in Nagchu. The sustained advocacy resulted in the inclusion of the cultural traditions of the famous Jhi-Nag-Khor-Sum and Choelung pilgrimage sites in the government list of protected “intangible cultural heritage”. Choephel had spent a considerable amount of his hard-earned money to ensure that a stone pillar is also erected to reflect the protected status of the sacred sites.

The enforced disappearance of Choephel is yet another example of the relentless persecution faced by local Tibetans who oppose destructive development projects in order to protect their environmental and cultural wealth. Decades of top-down development policies with overriding emphasis on mining and hydropower exploitation have deprived local Tibetans the right to a sustainable livelihood and healthy and clean environment.

Chinese authorities are known for engaging in widespread and systematic use of enforced disappearance to block access to due process and other safeguards for detainees that are deemed threats to China’s ‘unity’ and ‘stability’.

“We call on Chinese authorities to immediately put an end to the enforced disappearance of Tenzin Choephel, who has been a valuable asset to his people and community,” said Tsering Tsomo, executive director of TCHRD. “The sheer illegality of his detention and subsequent disappearance indicates political persecution and repression on the part of Chinese authorities to silence the prominent businessman for his exemplary work in protecting and promoting the interests of local Tibetans.”

Enforced disappearance is a serious international crime that violates multiple human rights and fundamental freedoms enshrined in the Universal Declaration of Human Rights and other major international human rights instruments. Article 2 of the International Convention for the Protection of All Persons from Enforced Disappearance, which China has not ratified, defined enforced disappearance as ‘the arrest, detention, abduction or any other form of deprivation of liberty by agents of the State or by persons or groups of persons acting with the authorisation, support or acquiescence of the State, followed by a refusal to acknowledge the deprivation of liberty or by concealment of the fate or whereabouts of the disappeared person, which place such a person outside the protection of the law.’ Although China has not signed the Convention, as a member of the UN, it is still bound by the principles embodied in the Declaration on the Protection of All Persons from Enforced Disappearance which was proclaimed by the UN General Assembly as a “body of principles” for all UN member-states, without the requirement of ratification, to apply as a minimum standard to prevent and punish the practice of enforced disappearance.

Article 9 of the International Covenant on Civil and Political Rights prescribes that “no one shall be subjected to arbitrary arrest or detention. No one shall be deprived of his liberty except on such grounds and in accordance with such procedure as are established by law.” The same article further stipulates: anyone arrested should be informed of the reason for his arrest and the charges against him; brought promptly before a judge “or other officer authorised by law to exercise judicial power” in order to decide without delay the lawfulness of his detention and order his release if the detention is not lawful; and shall be entitled to trial within a reasonable time. China has not ratified ICCPR but the covenant is binding on China because it is part of customary international law.