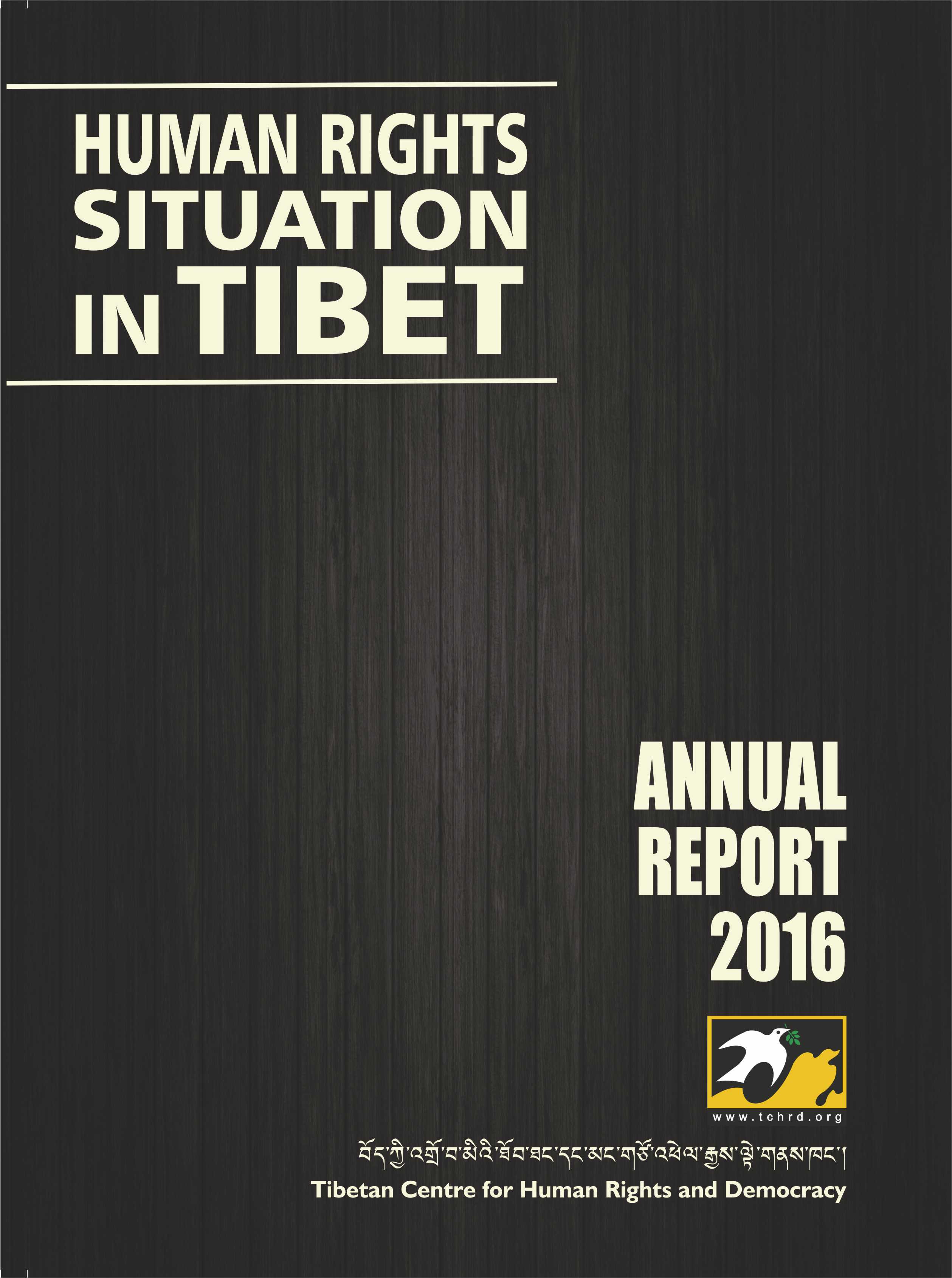 The party-state of the People’s Republic of China (PRC) continued its egregious human rights violations and abuses in Tibet by criminalizing basic human rights and freedoms, and engaging in arbitrary detention, torture, enforced disappearance, collective punishment and environmental destruction to name a few, according to the 2016 Annual Report on human rights situation in Tibet released by the Tibetan Centre for Human Rights and Democracy (TCHRD). Repressive laws and regulations were introduced and intensified to enable widespread and systematic human rights violations. Despite the extremely deplorable situation in Tibet, the PRC made no effort to change its policy of repression, authoritarianism and state-sponsored violence.

The report highlights tightened controls over the right to freedom of expression, privacy, religion, and assembly. In addition, it focuses on the substantial barriers faced by Tibetans in accessing the Chinese justice system due to PRC’s politicized and emasculated judiciary. The fate and future of Tibet’s environment remains a pressing issue in light of PRC’s continued practice of using Tibetan land and resources primarily for resource extraction and economic exploitation while forcing local Tibetans to lead impoverished and wasted lives, dependent on government handouts, on the margins of the Chinese economic boom.

The right to freedom of expression remained extremely restricted due to the introduction and enforcement of new and existing laws in the name of fighting terrorism, securing the Internet, and protecting state security. PRC authorities systematically exploited vague and over-broad legal definitions in the state secrets legal framework to carry out abusive, political prosecutions against those peacefully expressing their views or sharing information from inside Tibet. Self-immolation and solo protests, which are symptomatic of fast shrinking space for free expression in Tibet, are punished as criminal offences. With the extension of a mass surveillance program, freedom of opinion and expression are subjected to further restrictions forcing Tibetans to resort to unprecedented levels of self-censorship.

The right to privacy which guarantees individuals a space free from outside interference or government intrusion has emerged as one of the most important human rights issues in Tibet in recent years. In Tibet, blogs, instant-messaging services, discussion forums, and other internet outlets have long been monitored and censored. The Cyber Security Law, to be enforced in June 2017, will only contribute to further violation of privacy rights in Tibet. In addition to online surveillance, numerous mass surveillance programs implemented since 2011 enable local authorities to act as thought police and to collect political information. The number of known Tibetans imprisoned for social media activities particularly on WeChat has increased significantly in recent years. Tibetans have been jailed or disappeared for discussing Dalai Lama’s birthday or sending information about protests on WeChat. Storing banned songs or photos of Dalai Lama on cellphones in some areas of Tibet Autonomous Region is punished with two weeks detention or two years imprisonment if the suspect has no guanxi (official connections).

The right to freedom of religion and belief remained severely restricted through a combination of laws, policies and practices. The atheist party-state rejected legitimate calls for religious freedom and warned against “distorting China’s religious situation in the name of ‘religious human rights’.” To further use law as a sword to curtail religious freedom, a revised draft of the 2005 Regulations on Religious Affairs was released and will be implemented in 2017. Measures to control and exploit the system of reincarnation, and to discredit and delegitimize the person and position of the Tibetan spiritual leader His Holiness the Dalai Lama were intensified. For the greater part of 2016, the PRC conducted a large-scale demolition of the 20000-strong religious community of Larung Gar Tibetan Buddhist Institute. Despite worldwide condemnation and protests including calls from various government and civil society groups to halt the demolition operation, the PRC did not relent.

The right to freedom of movement was systematically violated with the imposition of explicit restrictions such as local directives prohibiting overseas travel, passport confiscations, and threats and intimidations. The PRC treated the right to travel including the right to obtain passport as a privilege granted by the government rather than a fundamental human right. The plethora of new and existing restrictions on passports and travel including restrictions on movement within Tibet has turned Tibet into a giant open prison. The violation of the right to freedom of movement has enabled violations of the rights to freedom of religion, liberty and security and adequate housing. Forced evictions and displacement of Tibetan religious practitioners violate their right to practice their culture and religion with other members of their community.

Although PRC ratified the Paris climate change agreement, accelerated economic development is threatening the fragile environment, livelihood and food security of millions of Tibetans. Numerous mining sites and hydro-dams are already becoming operational in Tibet, and more have been announced in the PRC’s 13th Five-Year Plan. Although PRC’s revised Environmental Protection Law (EPL) provides greater public participation in environmental affairs, it means little for Tibetans in Tibet where civil society is non-existent and environmental activists are routinely jailed on politicized charges. The PRC’s flawed understanding of the right to development became obvious again in its December 2016 white paper on development that attempted to expound human rights in aspirational terms and rejected the universality and indivisibility of human rights. It prioritized ‘right to development’ as a precondition for enjoyment of civil and political rights by stating that economic development is the top priority for the PRC and the key to resolving all other problems. This clearly contradicts the intended meaning of the UN Declaration on the Right to Development which asserts the importance of environment and self-determination including the people’s “inalienable right to full sovereignty over all their natural wealth and resources.”

TCHRD’s Political Prisoners Desk has noted a decline in the number of average detention in the last two years (2015 and 2016) due to extreme communication clampdown and use of collective punishment against those sharing information or maintaining contacts with outsiders. But the number was still high at 70. The average monthly breakdown for 2015 was approximately nine per month and in 2016, the number stood at 3.27 persons per month. Over the years, the PRC has introduced new policies and practices to censor and control information it wants to hide from the international community. In addition, its sheer avoidance of cooperation with international investigatory bodies, the stringent communication blockade, and the violation of privacy rights and censorship have made it harder to access complete information from inside Tibet. Accessing information from outside Tibet has become more difficult as well as ethically challenging due to the routine persecution and imprisonment of information sources in Tibet. Even if this report cannot fully represent the grave situation inside Tibet under Chinese occupation, it can surely be taken as an indicator of the great extent of human rights violations and repression faced by Tibetans inside Tibet.